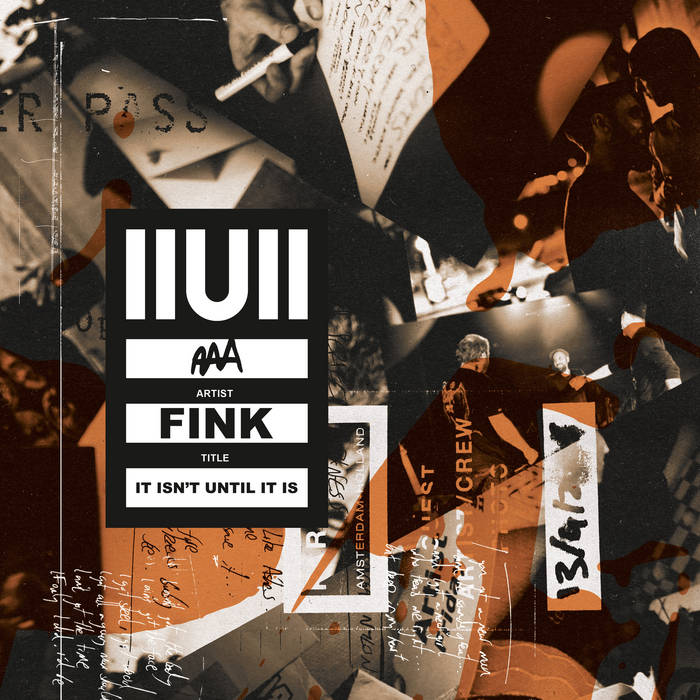 deeperthought It's hard to pick a favourite from this album. It is a really well produced, well performed fresh take on some Fink classics. Favorite track: This Is The Thing (IIUII).

Donovan Murphy Fin, you master... On this album, he somehow elevates the already supreme. So many of these songs bring me back to when and where and how and in what headspace I first heard their original versions... A collection of emotional time capsules. Favorite track: Walking In The Sun (IIUII).

henk duursma | deejay solo After having seen Fink so many times live, this album is like a wonderfull birthday present (to myself;-) : Mostly acoustic live versions of a selection of the 'best' Fink tracks, which must have been hard choices to make Favorite track: Yesterday Was Hard On All Of Us (IIUII).

Fin Greenall is an enthusiast. Rather more so than you might expect, in fact, from someone with more than ten albums under their belt. Whether he's talking about his new re-recorded acoustic retrospective collection IIUII (“it isn’t until it is”) with accompanying book of music and life memories, about his childhood in the English West Country, or everything in between - and this is someone who's lived a life and a half of hard graft and hard gigging in electronic, acoustic and even pop music already - that enthusiasm bubbles like someone half his age discovering the buzz of musical and cultural engagement for the first time.

Fin was born in Cornwall, which he remembers as "just beautiful - I'm so fortunate to have had that, I'm very proud to be Cornish." This early exposure rugged rural landscapes might go some way to explaining the pastoral strand that runs through his music - that and the fact his dad was a folk musician, who exposed him to the likes of John Fahey and Nick Drake early on. But at secondary age, the family moved to Bristol, perfectly coinciding with that city's absolute cultural explosion of the late 1980s. "It was an epic place to grow up," Fin says.

"Rare groove revival was coming in big time, a lot of jazzy stuff, hip hop, techno, outdoor raving, pirate radio like Fresh FM and Beats FM, all that was hitting at the very moment I was becoming a conscious young adult. I went to school in the middle of the city, you'd see Massive Attack driving around, you'd see Tricky in the clubs, you'd have your mind blown by a DJ playing 'LFO' one moment then by seeing Horace Andy... I was skateboarding too, I was right IN it, and we were so, so proud to be from this place with its own thing. And to be 16, 17 then, no phone, no email, just a skateboard and some money, it was so great!"

When he went to college, though, he went up north to Leeds, to some culture shock - "the weather was different, the music was different, everything was different." The scene was distinctly less laid back, less breakbeats in a field and more dressing up for house and techno in clubs like Back To Basics, Up Yer Ronson and Vague. Fin channelled his laid back West Country vibes into trying to mimic the electronica of The Orb and Future Sound of London "with a bit less drive and a lot less budget – but it showed me that this music thing wasn't a dark art, that anyone could do it if they wanted."

He took it seriously enough, though, to head to London and "DJing as a way of life". Again his enthusiasm shines here. Mid 90s London was a "thrilling place to be", the music industry was on the up, and he grabbed opportunity with both hands. He worked major label publicity jobs by day, and DJed, went clubbing and hung with the Ninja Tune crew by night. "I just automatically got drawn to what they were doing," he says, "because they were the one advancing what it could be: not just two decks but three, four, with multiple DJs at once, VJs, projections, art. It was just incredibly exciting."

Records followed, first for Ninja's experimental sub label N-TONE which gave Fin leeway to swerve from jungle to easy listening and back, then Ninja Tune proper, and the Fink Mark 1 sound fell into place. There was still plenty of spacey electronica present – but this was far truer to Fin's West Country roots: the swing and soul of Bristol music were shot through the 2000 album Fresh Produce, which remains a sparkling example of classic Ninja downtempo funkiness.

All this time Fin was DJing internationally, hustling at his day job, and generally enjoying "the clothes, the music, out every night, and everything else that you want when you're in your 20s." But, it transpired, this wasn't sustainable. "I was burning the candle at both ends," he says, "trying to prove something to myself, picking up some bad habits, but looking up the DJ tree and not really seeing anyone I wanted to be. At the same time I was looking at my job and thinking, 'do I really want to climb that ladder and be the CEO of something?'"

His escape came through songs. As a hip beatmaker he'd find himself asked to produce up and coming singers, including a then unknown, teenaged Amy Winehouse. Rather than just provide backing tracks, he found himself writing with her, and as with production a world opened up: songwriting wasn't a "dark art" either it was a skill to learn like any other. Meanwhile he was rediscovering his dad's records, and deepening his own love of acts like John Martyn, discovering "something honest, something filterless" about acoustic music and live music. Gigs by acts as diverse as Radiohead, System Of A Down and 60s folk legend Dick Gaughan turned his head: "this was what I wanted, not the same club spaces night in night out, week in week out."

Eventually, Fink Mark 2 was born - but it involved going for broke. A lucky break with a track on a movie soundtrack in 2002 gave him a payday that would keep him going for six months, and the moment came where "I thought, 'if you don't quit your job now, you'll never quit. Are you going to do this music thing or not?'" Funnily enough, having seen exactly what success looks like from his position in major label offices. "I'd seen a lot of pain, a lot of tragedy, a lot of sadness, a lot of good bands that didn't make it for really arbitrary reasons, having spent crazy amounts of money, and it made me realise that I could go a different way."

So he gave it all up, and scraping by on savings and tiny gigs, the album that would become 2006's Biscuits for Breakfast was years in the making, honing a sound that still had that Bristolian low-slung groove - a little beatbox here, some Hammond organ soul licks there - but with all electronic elements discarded, and the songs paramount. But Ninja Tune stuck by him - in fact it was them that pushed him to fully trust his songwriting; he'd imagined he'd combine beats and songs but Skev and Peter at the label told him that if he wanted to "go singer-songwriter" it should be all or nothing.

From there, it was step-by-step, bit-by-bit, gigging and hustle, making the odd dance track as Sideshow, gathering musicians, trying to get a foothold. But, says Fin, "I never looked back. Not once. Trekking around with my guitar on my back, even if I was playing a toilet venue in Mannheim on a Wednesday night, I was happy, because I knew how few bands even get there. Songwriting, too, became "a kind of psychoanalysis - where I hadn't really spent any time on myself in that relentless period of my 20s - and the more I did it, the better it worked for me!"

2009's home-recorded Sort of Revolution was "the break even album", but then 2011's Perfect Darkness upped the creative ambition, and it paid off in bucketloads. Since then, with a solid fanbase worldwide, Fin and his band have played the venues and festivals they want, and if not plain sailing (what is?), then certainly they've been in a space where they can operate with confidence, soaring with shoegaze layers one minute, back to purist blues basics the next. Add to this a sideline in co-writes on records by the likes of John Legend ("a beautiful thing to do, where you can just enjoy the craft of making a song,"), a few soundtracks and the occasional excursion into dub or techno to keep things interesting (after all he does live in Berlin now), and Fin is doing OK.

And so to IIUII. Both the acoustic album and the book are a document of the first ten years of Fink Mark Two, 2006-16 - "that whole arc, from my bedroom to having a proper hit, playing the big festival stages with big production, and all the rest." In 2019, after heavy band touring for three years, Fin did a solo acoustic tour which took him full circle back to the simplicity of those early days - and making an album that reflected this seemed a beautiful way to tie the whole story together.

IIUII, then, is a retrospective, but it’s just as much about the here and now. To rerecord those songs with the maturity that Fin and his band members have achieved is about viewing the past through the lessons it has taught, not just remastering and repeating it. This was a chance to listen back through all the records, appreciate them for what they are, separate from the usual demands of which songs work on stage – and then give each song the treatment it deserves. Thus the spare early tracks “Pills in my Pocket” and “Biscuits” twinkle with exquisite detail, and leave wide open spaces for Fin’s unflinching self-analysis to be heard. And the textural qualities of later tunes like 2011’s “Berlin Sunrise” or 2014’s “Shakespeare” are reimagined so they flow elegantly into your unconscious and stay there...

So here it is, and here he is - having taken the road less travelled and proved it worked. "I don't know if the industry could do that now," he says: "let someone work their way from nothing through album after album until it works. But Ninja stood by me, and that's what I did, and I can't tell you how good it feels to have got here by the difficult road."